I mentioned in a previous post that I love Christmas baking, and as some of you may be aware, last year, I made biscuit boxes for close family and friends. Whilst I vowed to never do them again, as they took me forever, I decided to make something a bit different for my loved ones...lolly baskets! Once again, I was completely inspired by a feature spread in Donna Hay's Christmas edition, where she suggested making lollies, a concept I fell completely in love with.

I began thinking about the different sweets I could make, and this is what I arrived at:

Besides rocky road, I had never attempted any of these sweets, so it's safe to say that I was a little nervous about giving them a go! I purchased a candy thermometer to make my job a bit easier (which in the end was a complete failure), and off I went!

I began with the honeycomb, as this would stay fresh for the longest. In reality, this should be easy. But when my thermometer failed to read the temperature correctly due to the fact that it relied on being completely submersed in mixture, I was in trouble. I had to use my gut instinct to determine when to take the honeycomb mixture off the heat, and thankfully, I was spot on! The honeycomb turned out perfectly, and was likened to Crunchies (a Cadbury honeycomb treat) by both my parents! Tick!! 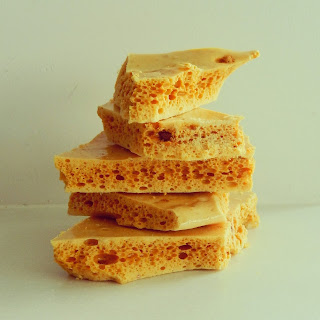 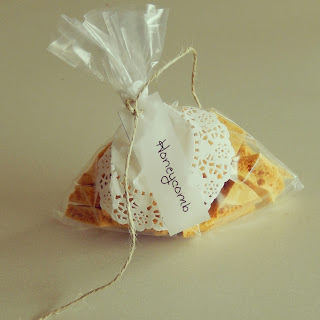 I went on to make the jubes, which were no hassle at all. I made both orange jubes and raspberry and blackcurrant jubes, modifying the base recipe with different fruit juices and flavourings. They were easy to cut, and looked pretty cute upon completion! 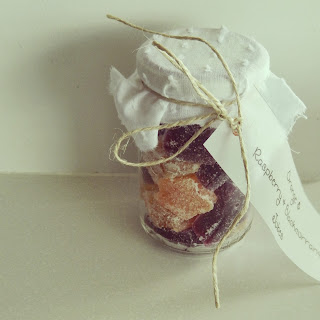 The rocky road is pretty self-explanatory. Chocolate, peanuts, marshmallows, but with the special addition of lolly snakes. I had never really considered adding in different things into the mixture, but after making rocky road with my aunty, I now do it all the time! I have just made another batch and added in sweet biscuits to the recipe, and I must say, it tastes pretty darn good! 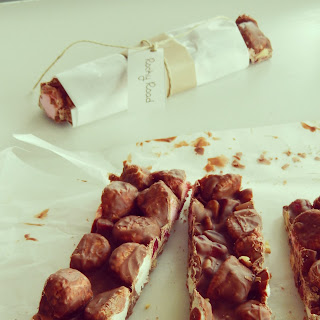 Now, we come to the problematic lolly...the caramel peanut chews. Once again, this recipe relied on using a thermometer...awesome. I made this treat in 2 separate batches, as my pot kept overflowing when the mixture would boil up. This was the first annoying thing. The second was that I had no idea when the temperature had reached 124°C. I tried holding the thermometer in side ways to get a more accurate reading, but after several burns, I gave up on using it. Once again, I was left to my own devices. After some time, I decided to take the first pot of caramel off the heat. It began to set well, so I was happy. The second batch was a different story. Rather than being chewy, it ended up being grainy and a fudge-like consistency...oops! 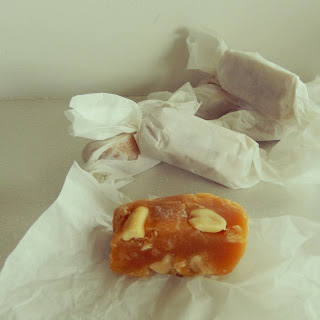 The last sweet treat I decided to create were cherry ripe bites...so basically, these are baby cherry ripe balls. This entails chopping up glacé cherries, and mixing it with condensed milk, coconut and red food colouring. You roll it up into balls, and coat in dark chocolate...easy peasy! 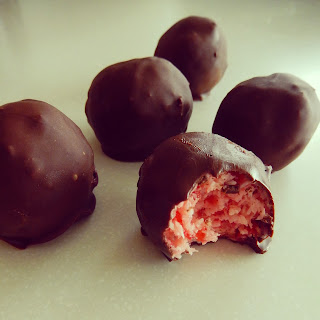 I packaged up the lollies in jars, brown paper and cute white doilies, and assembled them in baskets. To give them an extra special touch, I baked some gingerbread tags and piped the initials of the recipients on them. All in all, I was pretty happy with how they turned out, and everyone was really chuffed with my efforts. 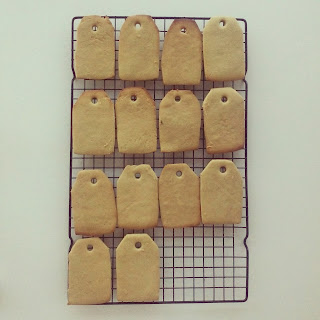 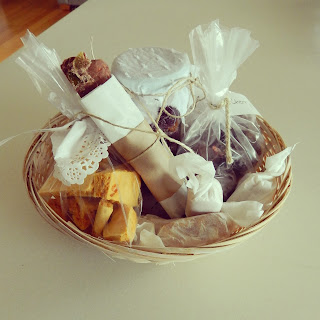 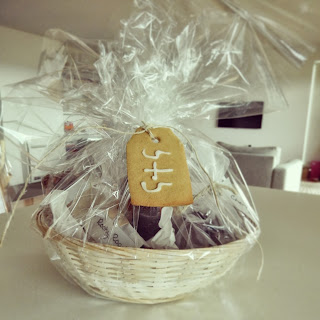 So there we go! A cute little gift that any one can make, and that everyone will certainly appreciate!

Until next time, happy baking.